For a lot of WordPress developers and users it’s easy to take for granted the infrastructure needed to run your WordPress website. WordPress makes it so easy to setup from the beginning and if you are using a good hosting provider, it’s even simpler. But if you are self-hosting WordPress you really should understand the WordPress Infrastructure Architecture. WordPress infrastructure can be deployed in several different ways. We’ll explore different architectures for hosting WordPress and the pros and cons of each. Although WordPress can be installed on many different Operating Systems, including Windows and Macintosh, we’re going to focus on Linux infrastructure. Linux deployments are by far the most common, and usually have a cost and performance advantage.

WordPress is relatively simple when it comes to infrastructure requirements. It is commonly referred to as a LAMP stack application. Linux, Apache, MySQL, PHP. From an infrastructure perspective these roll up into three distinct  components: 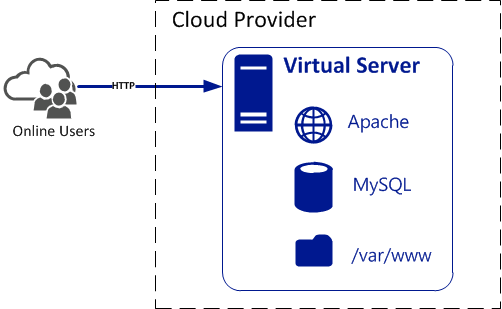 Probably the most common WordPress Infrastructure Architecture, the single tier architecture is simply a single server. Apache and MySQL are both installed on the server. The WordPress install is placed in /var/www/. For most self-hosted WordPress sites the single server is a Virtual Server deployed in a Cloud Provider. For sites with low to medium volume traffic, this solutions will work well. This architecture is very easy to deploy given that everything is local to one server. This also keeps the cost down. A small Linux virtual server can easily host several small WordPress sites, and the cost from Digital Ocean for example is $5/month.

The downside is that this architecture does not scale well and will not handle high volumes of traffic. With everything on one server, the only option you have is to resize your virtual server, adding more CPU and Memory. Scaling up your web server will buy you time, but if your traffic continues to grow you will not be able to continually scale up to meet growth.

Some popular cloud providers for Virtual Servers are: 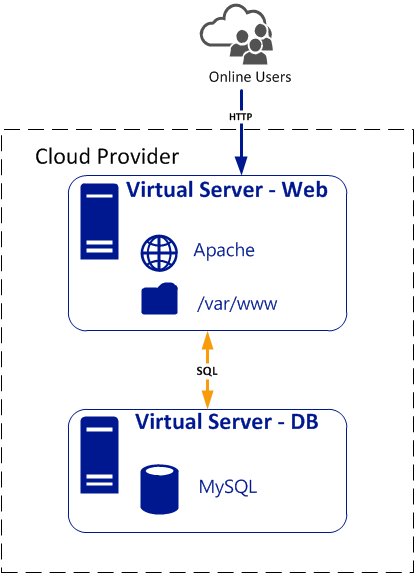 This WordPress Infrastructure Architecture scales much better than the One Tier Architecture. It can handle sustained moderate traffic, as well fairly large spikes in traffic. Also by moving the database to a separate server, you can improve the security of your environment. It costs more, but given that it’s only two servers the cost is still reasonable. The setup and configuration is more complex given that you need to connect the Web Server to the Database server over a network connection. As traffic grows on your website you still have to scale up your two servers to meet the load. However, even though this architecture is already scaled out some, you don’t have the ability to continue to scale out. 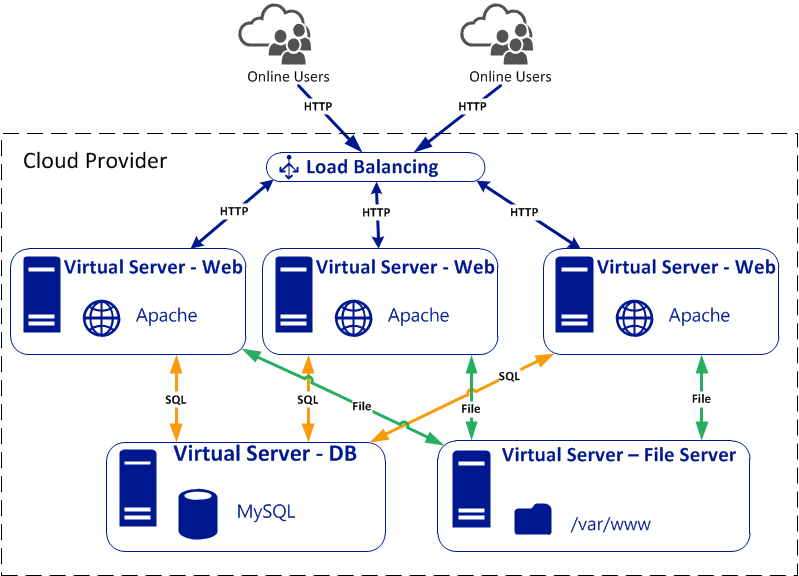 In WordPress, the MySQL database and File Content are the two application resources. By placing each of these on a dedicated tier the Web Tier can now scale horizontally. We can add multiple Web Servers that are load balanced, and spread our user load across multiple servers. As load increases, we can continue to add servers to the Web Tier. Also because we have no application resources stored on the Web Tier, we could easily expand and contract servers based on load using automation tools. In a pure Platform as a Service provider like Digital Ocean, we would use a solution like HAProxy. In Azure or AWS, we can leverage their native platform load balancing. 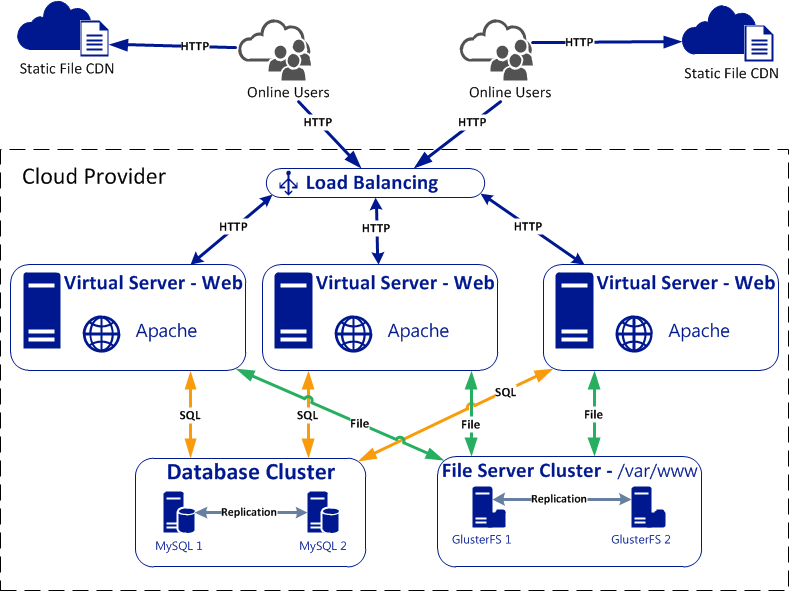 Much like in the Three Tier Architecture the Web Servers mount a file share that will store the web content. But instead of having a single NFS server, a GlusterFS cluster will be used to provide a multi-node environment for storing the file content. As resources are needed additional GlusterFS nodes can be added to the cluster. This allows for the File Tier to scale horizontally as well as provide high availability if one of the nodes fail.

A Content Delivery Network is used to host static file such as images, Javascript files, and CSS files. The CDN hosts the static files on its servers across the Internet, which users download the files from. Not only does this help improve the performance of your website, but it reduces the amount of storage and bandwidth consumed by your website. Also keep in mind a CDN can be easily incorporated into any of the other WordPress designs above. There’s a number of CDNs that work well with WordPress and also have Free Plans:

Hopefully this article provides a good understanding of Wordpress Infrastructure Architecture and the various options available for building your WordPress environment.